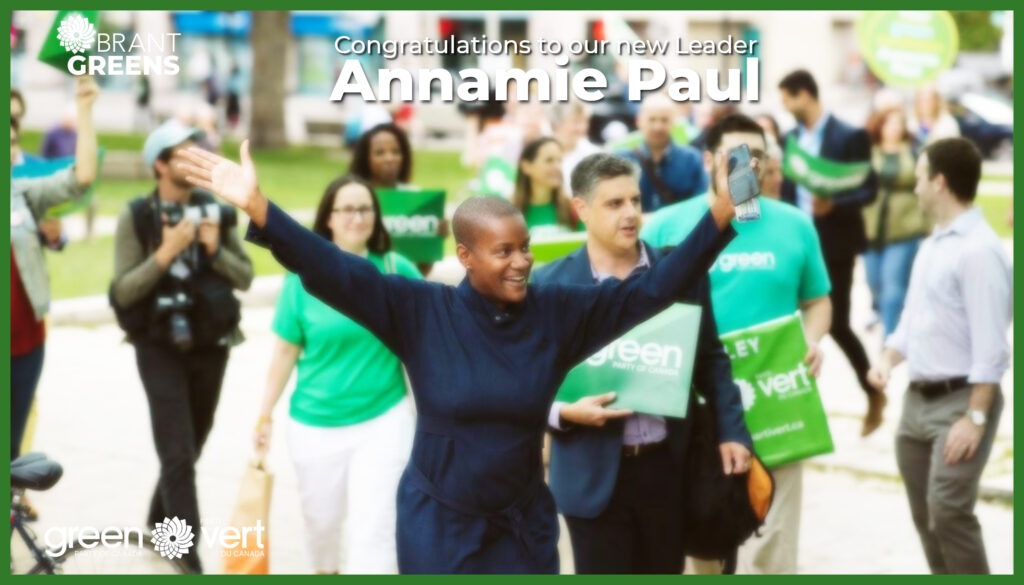 On behalf of the Brant Greens, I’d like to add our congratulations to Annamie Paul, the Green Party of Canada’s newly minted leader.  In the days following the election, Annamie rose to the challenge, demonstrating over and over why she is our best choice to take the GPC to the next level.  So far the volume of media exposure has been stunning, and Ms. Paul has kept the string of press conferences and interviews lively, bringing many facets of GPC policy into the national conversation.  Brava!

YouTube: Annamie Paul, Leader of the Green Party of Canada

About the GPC Leadership Voting System

In Canada, most political parties use a preferential ballot to choose their party leaders.

When the ERRE Parliamentary Process for Electoral Reform didn’t to deliver Justin Trudeau’s favourite voting system, the then-new Prime Minister used his majority power to pull the plug on the whole thing.

The voting system Justin Trudeau wanted goes by many different names, depending where in the world you are and who is selling it.  Winston Churchill called it the Alternative Vote (AV), and it is also familiar to Americans as Instant Runoff Voting (IRV) or  Ranked Choice Voting (RCV).  The system uses a preferential or ranked ballot, so Canadian Liberals have promoted it as “Preferential Ballot” or “ranked ballot”.

But no matter what name you use, citizens, parliamentarians, and experts alike rejected it, as it is another winner-take-all voting system that fails to deliver Proportional Representation.

But this voting system is considered acceptable in Canadian elections for political party leaders where there can only be a single winner. Alternative Vote is considered an improvement on First Past The Post because it decreases the impulse to vote strategically when party members share the same values.  The ability to rank all candidates frees voters to vote sincerely and allow the membership to choose a leader acceptable to a majority of voters. 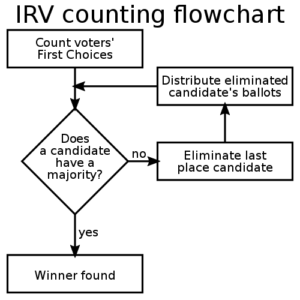 In this system, voters use a preferential ballot to rank the candidates in their preferred order.

23,877 ballots were cast by GPC members, so 11,939 votes (50% +1) were needed to win the leadership.  When all the votes are cast and counted, none of the eight candidates achieved that on the first count, so the last place candidate was eliminated, and ballots cast for them were redistributed to the remaining candidates based on the next choice on the ballot.  This proccess was then repeated through eight rounds of counting before a winner was declared. 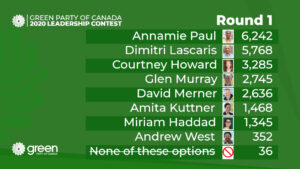 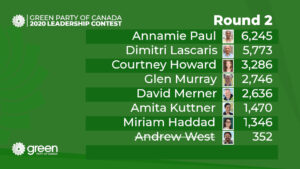 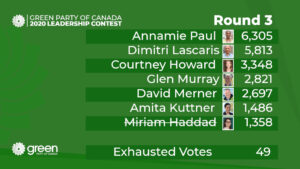 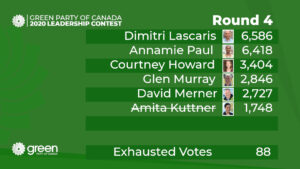 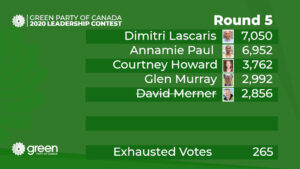 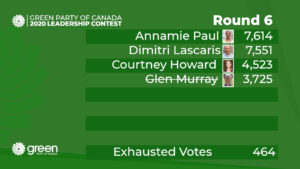 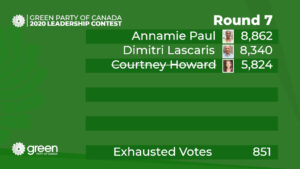 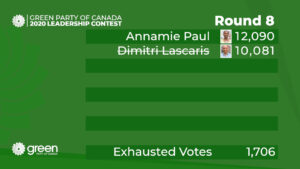 If the Green Party of Canada were to adopt a co-leadership model, as Greens in the UK do, we could have used the Single Transferable Vote to determine our co-leaders.  When used in such a multi winner election, a preferential ballot can be used to achieve Proportional Representation.

An STV election works in much the same way as AV/IRV, but instead of a single candidate winning with a majority of votes, the winners would each need to reach a vote quota determined by the number of voters and number of positions available.

Again, the process would be repeated until all quotas are reached.

YouTube: STV voting on the Death Star in 1 minute

Bob Jonkman is a former Green Party of Canada candidate. He ran in Brantford-Brant for the 2019 federal election, and in Kitchener-Conestoga for the 2018 provincial and 2015 federal elections. Follow @BobJonkmanGPC on Twitter.
View all posts by Bob Jonkman (he/him/his) →
This entry was posted in Green Party of Canada, Voting. Bookmark the permalink.