I’m very happy to announce that I’ve been elected to be the Kitchener–Conestoga candidate for the Green Party of Ontario in the upcoming Ontario Provincial Election on 7 June 2018. 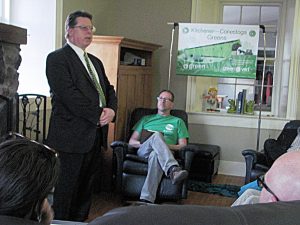 I’d like to thank the many Green Party supporters in Kitchener–Conestoga, especially those who came out to listen to the nominees and vote in the nomination contest.

Thanks to David Weber, for encouraging me in the previous Federal election, and for being the Returning Officer for the nomination contest.

And thank you to Bryan Izzard, our host, for giving us the use of your home and providing a wonderful array of light refreshments.

I’d like to thank my very worthy co-nominee, Patrick McDonald for keeping me on my toes, and giving me some new ideas to promote in my own campaign.

And a very special thank you to my wife, Laurel Russwurm, who has given me 100% support in this adventure, and who has worked very hard to promote the Green Party of Ontario and raise our profile throughout Waterloo Region.