Updated 4 June 2018, including some corrections from InterCityRail technical experts — Thank you!

One of the first events I attended as the Green Party of Ontario candidate for Kitchener–Conestoga was the InterCityRail Town Hall meeting on High Speed Rail, held Wednesday, 18 April 2018. 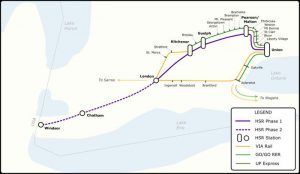 Kitchener–Conestoga rural residents are worried about the High Speed right-of-way cutting their farms in two, and since HSR cannot have at-grade crossings (because HSR is 177+ km/h speeds), farmers are concerned that they’ll have to detour tens of kilometres out of their way to access their farmlands — InterCityRail says only four grade-separated crossings are required to be kept open between Kitchener and London. It is not known how many will eventually be kept open.

There would be only seven stops: Starting in Windsor, through Chatham, London, Kitchener, Guelph, Malton, and ending at Union Station in Toronto. None of the smaller communities such as St. Mary’s or Stratford would have service. Not even the large community of Brampton is slated for a High Speed Rail station. If the experience of expanding GO Train service around 2012 is anything to go by, VIA Rail will cut its service to those communities once High Speed Rail is established. Phase One would connect Toronto with Kitchener-Waterloo and London with operations starting 2025, while Phase Two would extend the route to Windsor Ref1. Phase Two is not of immediate concern.

An alternative, High Performance Rail (HPR) has been proposed that would allow slightly slower trains (150- 175 km/h) to run on the existing right-of-way and still have grade-level crossings, but the Minister of Transporation, Kathryn McGarry (Lib), has flat-out said the government will not consider anything in their EPA study except a new High Speed Rail corridor. And the Ontario Federation of Agriculture that represents the farmers directly affected by this have not been consulted, and do not have a voice in the decision making.

Other jurisdictions are jumping on the High Speed Rail bandwagon too. 570AM news reports that Waterloo is pushing for High Speed Rail with the intention of turning South-Western Ontario into one continuous city of 6 million people…

I was a fan of High Speed Rail until attending the Town Hall meeting, which was educational in informing me about High Performance Rail and the issues farmers face with HSR. The Green Party’s Vision Planet document says: “Prioritize low-cost high-performance rail in the short-term as the province plans long-term for higher-cost, high-speed rail projects.” But as the representative for Kitchener–Conestoga I will advocate that High Performance Rail should be the ultimate goal, the better to keep farms together, preserve farmland, protect wildlife, and provide better rail service to smaller communities.

Actually, it’s more than Kitchener–Conestoga residents who are concerned, also Oxford and Perth–Wellington residents are affected, and more. Hopefully we’ll have Green Party Members in those ridings soon!

Bob Jonkman is a former Green Party of Canada candidate. He ran in Brantford-Brant for the 2019 federal election, and in Kitchener-Conestoga for the 2018 provincial and 2015 federal elections. Follow @BobJonkmanGPC on Twitter.
View all posts by Bob Jonkman (he/him/his) →
This entry was posted in Green Party of Ontario, Policy and tagged High Performance Rail, High Speed Rail, HPR, HSR, InterCityRail. Bookmark the permalink.