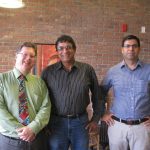 On Tuesday, 22 May 2018 I was invited for an interview on Bollywood Mix with Yasin Dewji and Andy Nagpal. 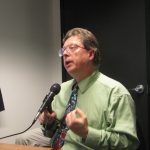 We talked about the Green Party’s platform, including Basic Guaranteed Income, the Renewable Energy sector, High Speed Rail, wandered away from provincial issues into local transit, and had a brief discussion on supporting the arts.

Bob Jonkman is a former Green Party of Canada candidate. He ran in Brantford-Brant for the 2019 federal election, and in Kitchener-Conestoga for the 2018 provincial and 2015 federal elections. Follow @BobJonkmanGPC on Twitter.
View all posts by Bob Jonkman (he/him/his) →
This entry was posted in Bob Jonkman and tagged Andy Nagpal, Bollywood Mix, CKMS, Radio Waterloo, Yasin Dewji. Bookmark the permalink.