The election is over, the ballots have been counted, and there are new MPPs everywhere. 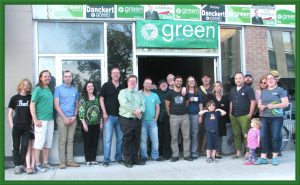 At the Campaign Office

I definitely want to thank all the Waterloo Region Greens who provided support, staffed the office, gave advice, and made it much easier to run a political campaign. 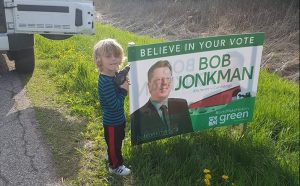 I Love Our Volunteers!

A special shout out to our volunteers who put up signs in all corners of Kitchener–Conestoga!

Of course, a big thank you goes to Laurel Russwurm, my wife and campaign manager, and my son Willem for putting up with all the frenzied activity of a campaign. 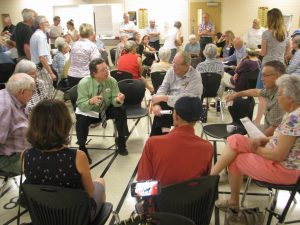 And finally, I want to thank you, the citizens of Kitchener–Conestoga, for attending the All Candidates Meetings, asking questions, and participating in your democracy.

Bob Jonkman is a former Green Party of Canada candidate. He ran in Brantford-Brant for the 2019 federal election, and in Kitchener-Conestoga for the 2018 provincial and 2015 federal elections. Follow @BobJonkmanGPC on Twitter.
View all posts by Bob Jonkman (he/him/his) →
This entry was posted in Bob Jonkman and tagged candidates, family, thanks, volunteers, WRGreens. Bookmark the permalink.