I don’t understand how AV “institutionalizes strategic voting” – if one is able to rank their preferences there is never a need to “vote strategically”… you put the candidate you would prefer most as your first choice, and your second as your second choice, and so on. There is no need to vote any differently than your real preferences because your vote continues to have an impact regardless of how other people in your riding vote. 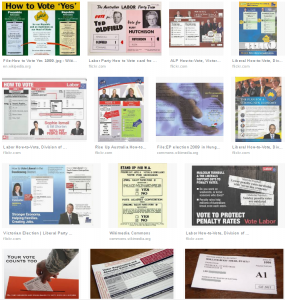 How To Vote cards I look to Australia for an example of “institutionalized” strategic voting. Their House of Representatives is elected using Alternative Vote; during the election parties hand out “How to vote” cards to tell people how to rank their ballots to ensure their party has the best chance of winning the election by giving lower rankings to candidates in particular ridings that might win on the second or third round of counting. Ranked ballots in single member ridings just tend to weight results to a single party. Conservative voters tend to give 2nd choice to a centre-right candidate, 3rd to a centrist. Progressive voters tend to give 2nd choice to a centre-left candidate, 3rd to a centrist. Suddenly you have the centrist candidate (who got few first-ranked choices) winning on the second or third round of counting. With single-member ridings this happens again and again in each riding. Centrist parties really like Alternative Vote in Single Member Ridings. To ensure that all voters along the political spectrum get fair representation, ranked ballots need to be combined with multi-member ridings. Single Transferable Vote does this, and to a lesser extend Mixed Member Proportional. In either case, the more members that are elected in a single electoral district, the better the proportionality, but larger ridings result in less local, geographical representation. In speaking with hundreds of people at Fair Vote information tables over the last 12 years, I find that people really value local geographic representation. So Mixed Member Proportional is a good compromise between proportionality and local representation. 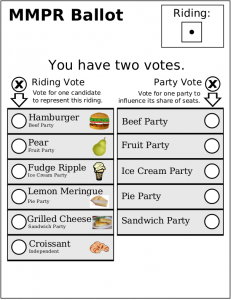 Be it resolved that the Green Party of Canada’s position regarding referenda on electoral reform is: That the Green Party of Canada supports conducting a referendum on electoral reform with options of proportional systems with a Gallagher index of 5 or less, as presented by the Special Parliamentary committee on Electoral Reform, but only 1) if the referendum presents only proportional voting options; or 2) after at least two consecutive elections using a proportional voting system.

Bob Jonkman is a former Green Party of Canada candidate. He ran in Brantford-Brant for the 2019 federal election, and in Kitchener-Conestoga for the 2018 provincial and 2015 federal elections. Follow @BobJonkmanGPC on Twitter.
View all posts by Bob Jonkman (he/him/his) →
This entry was posted in Policy and tagged electoral reform, Fair Vote, first past the post, Green Party of Canada, proportional representation, strategic voting. Bookmark the permalink.