A Strategic Vote Is A Wasted Vote 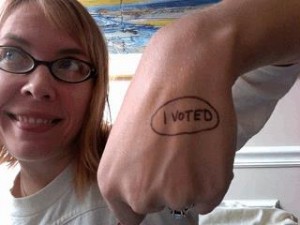 On Facebook, Gary Dale comments Time for the Green Party supporters to vote strategically to change the game.

Vote. Vote for the candidate who will best represent your interests. I hope that’s a Green, but vote regardless.

Better than a sticker! by Sonya Green is used under a