This is an exciting year for the Green Party, as ten excellent candidates compete in the quest to find a new leader to become the spokesperson for the ​.

On Tuesday and Wednesday you’re invited to meet our Leadership Contestants as they face off in the Green Debates with Steve Paikin on The Agenda.

June 23 for debate one, and 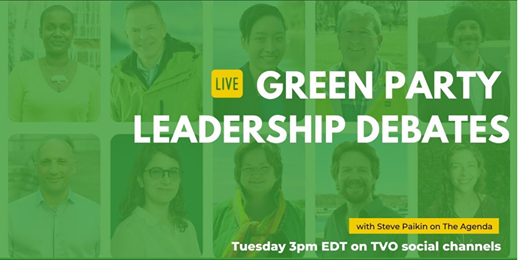 Bob Jonkman is the Green Party of Canada candidate for Brantford-Brant. Follow @BobJonkmanGPC on Twitter.
View all posts by Bob Jonkman (he/him/his) →
This entry was posted in Uncategorised. Bookmark the permalink.
Follow