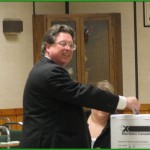 Vote for the candidate who will best represent you

I’m going to aim one last kick at the “Strategic Voting” can. Now that there is a feel for the relative strengths of the candidates in each riding, there are people who think they can manipulate the First-Past-The-Post system to influence the outcome of the election and oust the Conservatives.

Kitchener-Conestoga has a popular Conservative candidate, who won the 2011 election with a true majority of the votes. FPTP is not a factor in this case. Even with a proportional voting system, a candidate with a majority of votes will be the winner. FPTP or not, all votes for the other candidates put together cannot defeat a majority of the votes. So, in Kitchener-Conestoga, tactical negative voting will not work. You can safely vote according to your principles, and know that it will not affect the outcome. Vote for the candidate who will best represent you.

In Kitchener Centre it’s a toss-up between the NDP and the Liberals. The Conservatives don’t hold popular support in that riding, so that casting your vote for either NDP or Liberals and choosing the wrong “strategic” side just means the vote will be split. This is exactly what Strategic Voting activists fear the most. Vote for the candidate who will best represent you — which I hope is Nicholas Wendler for the Green Party, but I encourage you to vote for your principles. Any other choice just means the best you can hope for is electing a government you don’t want, and at worst handing a victory to the candidate you hope to defeat.

The Waterloo riding is another close call. Contrary to what the polls suggest, when I’ve been canvassing for Richard Walsh most people tell me they are still undecided. “Strategic Voting” means you need to know how other people will vote so that you can cast a negative vote against them, but in a largely undecided riding there’s not enough data on which to base your decision. Voting the for the candidate who will best represent you is the only strategic choice.

The strategic voting group Vote Together isn’t as effective as they hope. At a forum they held a few weeks ago they claimed to have maybe 2,000 supporters. But the Kitchener Centre voting base is around 65,000 people, so they hold only a small fraction of the votes. Their polling has been limited to small samples, land-lines only, with the usual inaccuracies that incurs. The small sample is not representative of the riding, and those people who respond may not be telling the pollsters how they really feel. The polls themselves show incredible fluctuation from one week to the next, showing that many people are still changing their minds, and may vote differently on election day.

So, vote for the candidate who will best represent you. It’s the only way to ensure you’ll get the government you want.